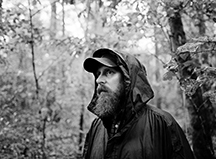 Above All Else is a dramatic, firsthand account from the front lines of the climate fight, shedding light on the high cost of resistance to the enormous political and financial power of the fossil fuel industry.

First proposed in 2008, the Keystone XL pipeline (pdf) is a multi-billion dollar project that is slated to transport tar sands oil from Alberta, Canada, across six U.S. states to refineries on the Texas Gulf Coast – a path which involved cutting straight through the land of David Daniel (right), a retired stuntman and high wire artist living in East Texas. While proponents claimed that the pipeline would increase North American energy independence and create jobs, the Keystone XL has faced opposition from day one, and Daniel joined that resistance. 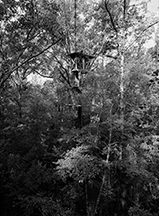 Pipeline opponents have a wide variety of concerns, from property rights and indigenous rights, to water quality and ecological destruction. Yet the most fervent and controversial reason many people oppose tar sands is that its exploitation will release massive amounts of carbon dioxide into the atmosphere and further disrupt the Earth’s climate, while diverting attention and resources away from low-impact, renewable, domestic energy. For these reasons, environmental groups such as the Tar Sands Blockade, which Daniel welcomed onto his land, specifically targeted the Keystone XL and created a campaign of civil disobedience to stop its construction. 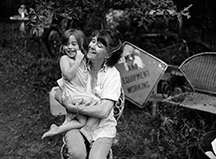 In 2011, the fight against the Keystone XL pipeline became the most visible fight in the American environmental movement when over 1,200 people – including Daniel and his neighbors Eleanor Fairchild and Julia Trigg Crawford – were arrested in front of the White House. A few months later, 12,000 people formed a ring around the White House to urge President Obama to reject the pipeline’s permits. Nonetheless, in March 2012 the president fast-tracked the southern leg of the Keystone XL pipeline which would run from Oklahoma to the Gulf Coast, and pass through our subjects' lands. 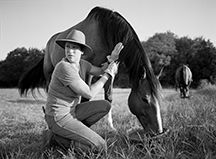 In response, David Daniels, with help from the Tar Sands Blockade, began a tree-sit in protest, constructing a visually stunning “tree village” directly in the path of the Keystone XL. Susan Scott (above) offered her land for Tar Sands Blockade to host the Texas Keystone Convergence training action, while Julia Trigg Crawford (left) refused to sign an easement agreement and fought the pipeline company, TransCanada, all the way to the Texas Supreme Court. Eleanor Fairchild (below) also joined the protest against the Keystone XL, urging the president to stop its construction, and was arrested on her property for impeding construction crews. The consequences of their choices to stand up for the environment and their property rights forms the core of our story in Above All Else. 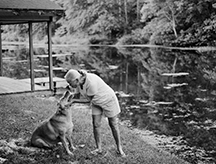 The GOP-controlled House and Senate have made Keystone a priority of the 114th Congress, passing an authorization on January 28, 2015. President Obama continues to delay his decision on the northern segment of the pipeline, threatening to veto any legislation that would authorize the Keystone XL. North America is now ground zero in a climate war that pits a domestic energy boom against the stability of the global climate, and the Keystone XL pipeline continues to be a potent symbol of that conflict.

After premiering at SXSW, Above All Else has screened at dozens of festivals, climate change events, community groups, and universities around North America, introducing audiences to this inspiring, dramatic story of ordinary citizens turned into activists in consequences not of their choosing. Learn how to bring Above All Else to your community.

Ruby Blue Fire commented 2013-05-12 23:12:03 -0500 · Flag
After living in Alberta most of my life I have seen how the oil industry not only destroys the land – but the hearts minds and souls of the families of good people that take jobs in the industry.

My step father died working up in Fort McMurray – heart attack. My now ex-husband – it totally changed him. This industry is full of those that get caught up in alcohol – drugs – pornography, to help deal with the boredom, long hours, loneliness, exhaustion and stress. It is a psychopathic and sick industry that creates more of it sickness in everything that touches it. It just needs to end.

ABOVE ALL ELSE reveals the hidden story of how the Keystone XL pipeline battle in East Texas built a community of resistance to the climate crisis in America.
Follow @johnfiege on Twitter